I've been composing Top 10 Lists in my head, but not completing them. So I mulled a Top 10 List of Top 10 Lists I Never Complete. However, I didn't finish that either. So I wondered if whittling it to the Top 5 would help. But with a hungry school girl scheduled to barrel into the apartment shortly, I might even settle for 3 or 4.

Top 5 Laughably Annoying, Chaotic Mishaps of the Week*
*This does not include anything related to conflicting or unresolved coverage of bin Laden's death. Or anything else of actual importance, for that matter. These are just goofy little episodes that make me wonder if sitcoms actually ARE based on reality.

1. I have (had) a very cute toilet brush with a little blue pond encased in the handle, in which swam some tiny rubber duckies. It was like a rubber-ducky snowglobe, but filled with blue-colored oil to make the quackers surf the faux water ever so cutely, especially if shaken. It looked like this cup, except it was a toilet bowl brush: 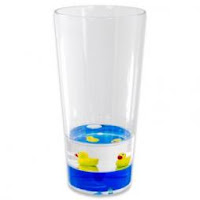 It's nice to pretty up the toilet experience if at all possible, don't you think?﻿
Anyway, I picked up the brush to clean the you-know-what, and thwack! the handle forcefully broke apart. First, there was the banana-peel-esque physical comedy of trying to catch the brush itself as it flew across the bathroom (over the toothbrushes - eeeww) and catching it in my hands (eeeewww). The six-year-old would have loved it.
Worse, water + blue oil flew all over the bathroom! (This rivalled the time when I was eight months pregnant in NJ, and O. was in Poland, and I knocked over a bright-blue, burning candle onto a cream-colored carpet. It had been burning for hours and was basically a sloshy pint of hot, blue melted wax.) Artificial blue oil is just not what you want yourself OR your apartment to be awash in, let alone if it derives from a toilet utensil. Fun clean-up (not)!
(The rubber duckies have been flushed. I couldn't help it. It's illegal to flush inanimate ducks in Switzerland, so I hope the coppers don't read this.)
2. Earlier this week, when racing out the door to work (my American ways always in conflict with the Swiss penchant for punctuality), I quickly dropped my jacket on the floor by the door to grab something from another room. As I ran back to slip the jacket on, I found my cats had sabotaged me. Potty (urine, in case you don't regularly converse with a little kid) was in a giant puddle on the jacket. Doh! Do they secretly hate me? I should threaten to put the feline Lucy and Alladin into a costume and post one of those cruel, dumb, humiliating videos on You Tube. That'd teach 'em.
3. On the tram, Li'l G. and I were creaming up with sunscreen, and she accidentally sprayed a giant squirt on the black skirt of the Sunday best of another passenger. Luckily the passenger was quite gracious about it. Once people hear my accent, they seem to accept any mishaps as a matter of course.
4. I won't even mention how many times I have walked right into the blinds over the glass balcony door, as they're broken and suspended about halfway up. (They're strong metal blinds that are common here and close to create a sort of thick, second, metal door.) The metal slats clank and clatter loudly, ensuring my clumsiness is broadcast each time far and wide in the neighborhood. Supercool.
Is it just me walking around here like Jack Tripper from Three's Company? I kinda suspect it is. Anyway, having already used up all the swear words, it's good to have something to laugh about.
Posted by Lady MacBeff at 12:31

Lady MacBeff
Zurich/Zug, Switzerland
Picture a female Hamlet (conflicted, wordy, did a semester abroad in college) - but with a sweeter disposition. Add a precocious pre-adolescent daughter and a one-year-old who already excels at the Terrible Twos, a 20+ year vegetarian habit and a pitchblack sense of humor. Also, I care for someone who sustained a traumatic brain injury and high spinal injury and happen to live in Switzerland. Formerly a business reporter, I now work for a medical publishing house. And (since I'm baring my soul here anyway), I don't mind Kidz Bop as much as I should.