I don't usually read instruction manuals, but I skimmed through the instructions for our new DVD player (which, by the way, was inexpensive but Code Free, which will mean something to you expats!). I am glad I read the manual this once, because I found this gem of a tip about a Parental Lock feature: "If the disc allowed, you could edit out violent scenes unsuitable for children and replace them with more suitable scenes."

Now, I can picture editing a movie to cut scary or inappropriate parts. I "edit" some fairy tales as I read, skipping nightmare-inducing parts or glossing over bits I'm too tired to explain to Little Miss Curious. In another version of ad hoc censorship, a certain companion of mine noisily sneezes or coughs during parts of songs or books that don't pass my approval for 7-year-old ears. But the idea of replacing part of a film with something "more suitable?" I see the potential to majorly warp a kids' mind.

The idea of splicing film, trying to rewrite history or manipulate minds with media isn't new. But the suggestion of switching scenes around (rather than avoiding violent films or even just skipping parts)? I can't help imagining what an insane perception of the world this could give a kid. Alex in a Clockwork Orange suddenly replaced with Swiper the Fox? It conjures up images of planting a warped Memento-meets-Strawberry Shortcake-meets-Fight-Club childhood in my daughter's future memories.

And here, the kid is already so warped by media. Well, it's the Photo Booth feature on the iPad. But you can see the dangerous influence setting in. 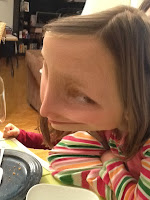 After this surprising tip, I'm almost tempted to read the rest of the DVD-player manual.

Lady MacBeff
Zurich/Zug, Switzerland
Picture a female Hamlet (conflicted, wordy, did a semester abroad in college) - but with a sweeter disposition. Add a precocious pre-adolescent daughter and a one-year-old who already excels at the Terrible Twos, a 20+ year vegetarian habit and a pitchblack sense of humor. Also, I care for someone who sustained a traumatic brain injury and high spinal injury and happen to live in Switzerland. Formerly a business reporter, I now work for a medical publishing house. And (since I'm baring my soul here anyway), I don't mind Kidz Bop as much as I should.